God said to Israel, “Don’t sin for if you do I’ll remove you from the land”. Oh how the prince of the power of the air, the god of this world wanted to destroy Israel. If he could get them to reject God’s law then God himself would have to judge them and cast them out of the land by allowing the enemies of Israel to have success.

In 740 BC and following, Israel indeed was taken captive and removed from the land. “Ten tribes down and only two to go”  you can hear the adversary thinking. Judah was out for 70 years from 586 BC and then back again. The baby boys of Bethlehem were all killed trying to stop the Promised One. Then the Romans were used to kill the One.

“Not so fast, amigo” for He rose from the grave.

So 70 AD saw the destruction of Jerusalem and the temple and finally , in 135 AD, saw the last of Judah from the land.

“Not so fast, amigo” for God’s very spirit had fill the disciples and now as Apostles they were sent to the nations.

Andrew was one such Apostle and he is recorded in history as having gone to the peoples dwelling along the Black Sea.

And why is this topical this week, you might ask? Well, President Putin just awarded President Xi Jinping the Order of Saint Andrew, their highest award. Russia feels grateful for the friendship that China has showed her. And indeed this was prophesied by Schema-monk Aristocleus, not long before his death in August 1918. See notes at end of blog. 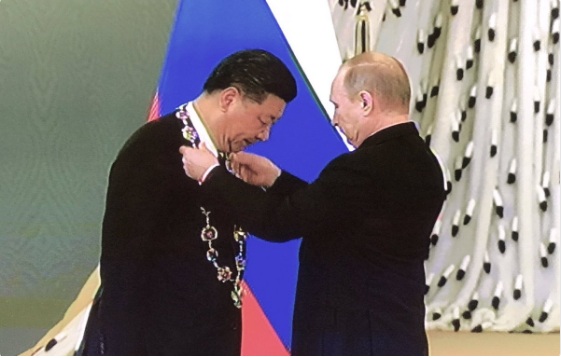 You see God was going to fulfill His promises to Abraham and bring the knowledge of the glory of God to the whole earth, and He was going to use Israel – in the nations – to do that.

Andrew, the Apostle, went to the Scythians dwelling by the Black Sea. To understand who the Scythians were requires reading Steven M Collins four volumes republished from his original Lost Tribes Found. He systematically shows them to be an empire containing large parts of the Ten Tribes of Israel. We all know from history that the great Celtic migration arose from this region and went across southern Europe through Spain into Great Britain.

From there the world, colonization by Spain, Portugal and Great Britain, extended this bloodline throughout the New World, Africa and the Pacific.

Of course they also went north into Russia and northern Europe and east into Central Asia and ultimately China, Korea and Japan.

Saint Andrew is the patron saint of Scotland.

Saint Andrew is the patron saint of Scotland. Have you ever thought, why?

Well it turns out that these Celts knew they were formally Scythians from the Black Sea.

As it was Andrew who had gone to this area and they used this connection to make him their patron saint. We can still read about this in the surviving Scottish Independence document. Cited in full at the end of this blog.

Anyway back to our Br’er Rabbit theme

Anyway back to our theme………. God warned Israel not to sin for they would be removed from the land. Let’s say that Satan, as Br’er Fox, took the bate and caused Israel to sin.

Now Israel are in the world, and what’s more they have been pushed to the ends of the earth. They are in the Briar Patch, so to speak. Just where God wanted them so they could be a blessing to all the families of the earth.

We are now starting to witness the awakening of the House of Israel through the filling of the Spirit of God in the Sons of the Living God that Hosea 1 prophesied.

Every promise to Abraham, Isaac and Jacob will be fulfilled and every family of the earth will be blessed through Abraham’s seed both spiritually through Messiah and physically through the casting out of Israel into the nations by the Br’er Fox character of Satan himself.

Scottish Declaration of Independence connects the Scots to the Israelites

“Most Holy Father, we know and from the chronicles and books of the ancients we find that among other famous nations our own, the Scots, has been graced with widespread renown. It journeyed from Greater Scythia by way of the Tyrrhenian Sea and the Pillars of Hercules, and dwelt for a long course of time in Spain among the most savage peoples, but nowhere could it be subdued by any people, however barbarous. Thence it came, twelve hundred years after the people of Israel crossed the Red Sea, to its home in the west where it still lives today. The Britons it first drove out, the Picts it utterly destroyed, and, even though very often assailed by the Norwegians, the Danes and the English, it took possession of that home with many victories and untold efforts; and, as the histories of old time bear witness, they have held it free of all servitude ever since. In their kingdom there have reigned one hundred and thirteen kings of their own royal stock, the line unbroken by a single foreigner. [3]

Our Scythian Ancestors Identified with Israel; by Col J.C.Gawler

NOTES FROM OLD RUSSIAN PROPHETS. THESE MEN PREDICTED THE FALL OF RUSSIA INTO WHAT WOULD BE COMMUNISM BUT SAW GREAT THINGS FOR RUSSIA ON THE OTHER SIDE.

Schema-monk Aristocleus, not long before his death in August 1918, said that “now we are undergoing the times before Antichrist, but Russia will yet be delivered.  There will be much suffering, much torture.  The whole of Russia will become a prison, and one must greatly entreat the Lord for forgiveness.  One must repent of one’s sins and fear to do even the least sin, but strive to do good, even the smallest.  For even the wing of a fly has weight, but God’s scales are exact.  And when even the smallest of good in the cup overweighs, then will God reveal His mercy upon Russia.  Ten days before the end (of his life) he said that the end would come through China.  There will be and extraordinary outburst and a miracle of God would be manifested.  And there will be an entirely different life, but all this will not be for long” [Orth. Russia, 1969, #21, p. 3].

The salvation of the world is from Russia. St Petersburg will become the spiritual centre of the country. There will be more great events in Russia – the opening and glorification of holy relics in St Petersburg – a great joy for the whole world…

The Orient will be baptized in Russia. The whole heavenly world is praying for the enlightenment of the Orient.